Per Talk Business and Politics

The historic Maxwell-Hinman home at 902 N.W. Second St. near downtown Bentonville is headed for public auction at 2 p.m. June 9.

Wilson Auctioneers of Hot Springs will conduct the auction on-site. David Brewer, the company president, said the owner, S.K. Morrison Trust, is selling the property to settle the estate of the late Dr. Samuel K. Morrison, who died in March at 94.

The Morrison family has owned the property since 1963.

Brewer described the home as a unique property because of its Walton Boulevard frontage and proximity to the downtown square. It’s also zoned C-2 for general commercial development.

The L-shaped Italianate brick house is 3,352 square feet and sits on 0.97 acres. Brewer said a returning Civil War veteran supposedly built the home in 1881. The National Register of Historic Places listed the property in 1988.

Wilson Auctioneers will auction three additional Bentonville properties at the June 9 sale, all owned by the Morrison Trust. The others are a 0.98-acre commercial tract at 1200 N.W. Third St. (adjacent to the Maxwell-Hinman House), a 1,822-square-foot residential property at 208 S.W. E St. and a 5.6-acre parcel (C-2 zoning) at 2200 N. Walton Blvd.

“Wilson Auctioneers is excited to have the opportunity to work for the Morrison family and offer four unique properties in Bentonville,” Brewer said. “The Maxwell-Hinman home has a tremendous amount of potential as a residence, or possibly a real estate or law office. With the proximity to the new Walmart headquarters, it could also be redeveloped into a commercial application.”

Brewer said interested buyers could also submit offers before June 9, which is typical in the current real estate market, so the properties may sell before auction.

The Wilson Way by Inviting Arkansas With nearly a century of combined real estate auction experience, the team of experts at Wilson Auctioneers delivering a winning combination of enthusiasm and energy – with measurable results. President & Principal Broker Joe Wilson share insight for his company’s continued success.

WHAT IS WILSON AUCTIONEERS BASIC BUSINESS MODEL? We are a real estate auction company – a full service, in house operation. With our own bidding platform, our services are convenient and reliable.

WHAT MAKES WILSON AUCTIONEERS UNIQUE? We sell everything as a public auction. Most of the people are not in trouble, but just looking to buy, sell, or auction their property.

WHAT ARE YOU INSPIRED BY? My dad started the company in 1961. In the beginning, he worked at a gas station making $25 a week seven days a week. One day, he went to an auction and the auctioneer made $96 as his commission in just one hour. The rest is history.

WHAT IS A PERK OF BEING A BUSINESS OWNER? You’re your own boss .. two edge sword!

WHAT IS YOUR BEST ADVICE? My dad once told me to treat everyone like you want to be treated and to be an honest – a man of your word.

WHAT IS YOUR FAVORITE THING ABOUT LIVING + GIVING IN ARKANSAS? I love this state! I have been in business for 48 years and one of the most rewarding aspects is getting to give back to my community.

WHAT IS YOUR MUST-HAVE BUSINESS TOOL? The ability to market to the community and finding a buyer based on what we are selling.

HOW WOULD YOU DESCRIBE YOURSELF? Honest. Thursday’s absolute real estate auction was conducted by Hot Springs-based Wilson Auctioneers Inc., and included three parcels totaling about 38.3 acres at the northwest corner of Keller Road and Arkansas Highway 102. Norm Banwarth paid $919,160 for the remaining two tracts, which includes a 1,988-square-foot residence and frontage along Highway 102. The purchase price of that property equals $0.55 per square foot.

Centerton Mayor Bill Edwards said the fast-growing city will develop the 20-acre site but a specific use hasn’t been determined. He mentioned the possibility of additional sports fields. The city built the 17-acre Kinyon Sports Complex off Gamble Road near Centerton Gamble Elementary School in the past two years. It has four fields for baseball or softball and a multipurpose field for football or soccer.

“For a city with 18,000 people, that ain’t many ballfields,” he said. “We’re growing like crazy and we thought this would be a good investment.”

The 38-acre site was once a turkey farm and homestead owned by Laurence Keller. The owner at the time of the auction was Keller’s daughter, Connie Cloe, president of Jack White Hatcheries Inc. The land has been family owned since 1964 and is currently zoned for agriculture use.

Chuck Dicus, a Wilson Auctioneers agent, said he showed the property to several prospective bidders from Arkansas and surrounding states in the weeks leading up to the auction.

“As soon as the [auction] signs went up, the phone started ringing, and we had some offers,” he said. “But the seller trusted the auction method and the outcome far exceeded her expectations.”

Per TB&P, Groundbreaking for a new neighborhood in southwest Rogers was held June 14.

The $4.2 million project is called Savannah Estates, located on Wallis Road and situated between the Liberty Bell South subdivision and Pinnacle Memorial Gardens.

The land owners are John George of Springdale and Nathan Fairchild of Rogers. Their JONA Development LLC acquired the land (20.75 acres) earlier this year in two separate deals for a combined $905,000, which equals $1 per square foot. The previous landowners were the Blevins family (4.83 acres) and a limited liability company owned by Johnelle Hunt (15.92 acres).

“We’re excited to turn a grass field into something useful for 57 families,” George said. “Pinnacle Gardens is a beautiful neighbor, and so is Liberty Bell to the west. This will put a good inventory of homes into the city of Rogers and will be good for the economy for the city of Rogers.”

Savannah Estates will have 57 single-family lots, and Buffington Homes of Fayetteville is the exclusive homebuilder and developer. The company’s in-house real estate division, Neighborhood Realty, will be the exclusive listing agent.

“We’re just about done building in there, so [work-wise] this neighborhood will essentially be replacing that one,” he said. “It’s a growing area with a lot of amenities.”

Bates & Associates in Fayetteville is the civil engineer and Adams Excavating in Rogers is doing the excavation and site work. Lots could be ready for construction by the end of the year.

Grand Savings Bank in Bentonville is the primary financier the project, with a one-year construction loan of $2.15 million.

Caterpillar to add 250-plus jobs at North Little Rock plant

Per TB&P, Caterpillar officials announced Thursday (July 5) plans to invest $40 million in the company’s North Little Rock plant and add more than 250 jobs as part of an expansion to make paving equipment. An estimated 525 people now work at the plant.

Thursday’s announcement at the plant that first opened in 2010 included Gov. Asa Hutchinson.

“The expansion of Caterpillar’s North Little Rock facility illustrates the growing economy we have experienced throughout the state,” Gov. Hutchinson said in a statement provided by Caterpillar. “We’ve seen great things from Caterpillar’s facility in recent years, and the new jobs mean more opportunity for Arkansas families. This announcement shows the faith that Caterpillar has in our workforce, in the state and in our communities.”

Peoria, Ill.-based Caterpillar opened the plant to build motor graders, and in late 2017 added the production of medium wheel loaders to the manufacturing line. The $40 million investment includes work between 2017 and 2020, when the lines to produce paving equipment – a large six-wheeled rotary mixer, for example – is expected to be complete.

Company officials at the non-union plant said within the next year they will begin hiring assemblers, welders, mechanics, machinists, fork truck drivers, and order pickers on first, second and third shifts. The company is hosting at job fair from 8 a.m. to Noon, July 21, at the North Little Rock plant.

“Adding new products into the facility gives us a lot of opportunity, and I’m most excited about expanding our team to make the machines that will help our customers build a better world,” said Paul Rivera, Caterpillar North Little Rock operations manager. “To support additional production, we’re looking to hire an additional 250 new employees.”

New manufacturing jobs could help boost a segment of the central Arkansas economy that has struggled in recent years. As of May, the region had an estimated 20,200 manufacturing jobs, down 0.5% compared to May 2017, according to the U.S. Bureau of Labor Statistics. Manufacturing jobs are about 6% of the total number of jobs in the state’s largest metro area.

Caterpillar products made in North Little Rock.
Statewide, manufacturing jobs are growing, and reached an estimated 160,100 in May, up 2.2% compared to May 2017. Manufacturing jobs in May were 12.8% of the state’s total nonfarm employed.

The company announced earlier this year plant closings in Aurora, Ill., and Waco, Texas. The company also closed a demonstration center in Panama. The actions were expected to result in 880 combined job losses at the three locations.

However, some market watchers remain bullish on the sector. UBS equity analyst Steven Fisher recently issued a “Buy” rating on Caterpillar and raised his target price from $178 to $185. Fisher believes growth in the global mining sector will benefit Caterpillar. Welcome to the newly designed WilsonAuctioneers.com. The goal of the new site is to put a focus on the types of properties Wilson can handle, and the commitment we take with every auction we handle.

Part of the new site is a heavy focus on delivering more value through content, which includes putting you at the Auctions live!

Dicus, who played football at the University of Arkansas, is a former president of two notable nonprofits in the state — the Razorback Foundation and the Arkansas Game & Fish Foundation. He also previously worked for commercial real estate firm Irwin Partners in Little Rock.

“The entire Wilson staff is excited that Chuck Dicus has joined our team,” company president Joe Wilson said in a news release. “Chuck is a multifaceted agent, with knowledge of the outdoors, hunting land, farms and commercial real estate. He provides more than 30 years of experience and networking with Arkansans in every corner of the state.”

Dicus will be responsible for listing real estate, farms and commercial properties for auction in Arkansas, with a focus on Northwest Arkansas.

“Ken’s experience in the title insurance business will further our commitment to providing clear transactions, 30-day closings and a direct line for our buyers and sellers to receive information for their closings,” Wilson said in the release.

Bethge, who has 45 years of experience in the real estate business, has served as secretary of the Arkansas Building Authority Council, chairman of the Jefferson County Equalization Board and chairman of the Pine Bluff Planning Commission.

The app allows you to (1) stay informed about our upcoming auctions; (2) view properties that interest you; (3) get notifications when you’ve been outbid; (4) bid no matter where you are located. This is the go-to-source for up-to-the-minute information on all of our auction listings. 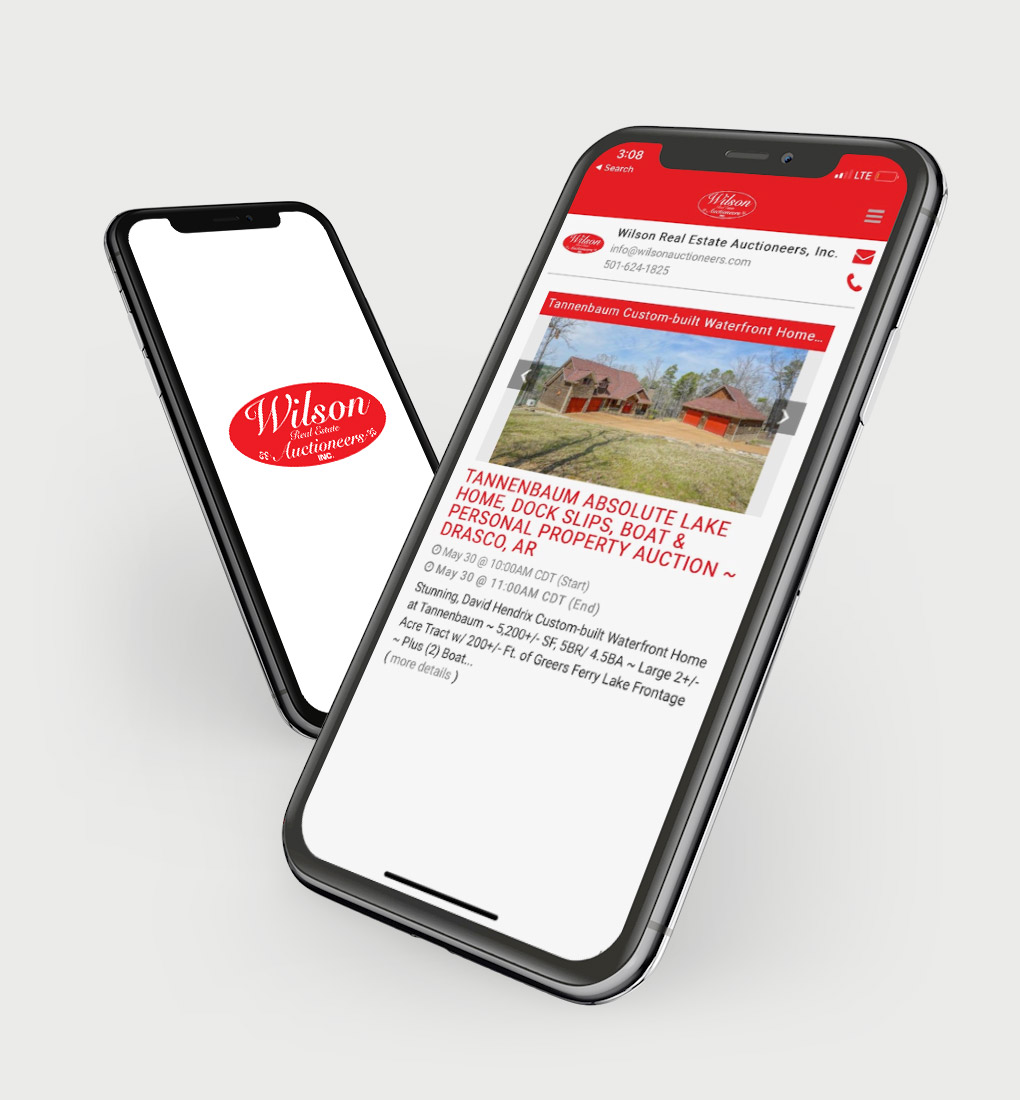